Boomer is one of the three main protagonists in the television series, Redakai: Conquer the Kairu. He is a member of Team Stax, a team consisting of Ky, Maya, and himself; three warriors learning to master Kairu. His Signature Monsters are Froztok and Chemaster.

Boomer has blond hair in an red headband. He has yellow eyes, and a light skin tone. He wears a dark brown shirt with white lines on the sleeves, a brown unzipped jacket, brown pants, a white belt with the Radakai symbol as the buckle, and brown and white shoes. He also wears a pair of metal silver bracers with a pattern that ends in a green "eye"; Both of them can be used as X-Comms to keep in touch with the rest of Team Stax.

In season 2, he wears a blue vest and a pair of blue jeans instead.

Boomer is a comedic person. Built to fight, and dedicated to his team, Boomer is the strong arm of Team Stax. He has a sense of humor -- his good-natured wit is the perfect balance between Ky's brashness and Maya's reason.

He was born on his family's farm in the Midwest but left at a young age to join his childhood best friend, Ky as a student of Master Boaddai. While Boomer sometimes struggles to find his place among Team Stax, his strength, versatility, and loyalty make him a valuable asset to the team in their quest to restore balance to the universe. Most used creatures Froztok.

Boomer made his debut in The Fist of the Colossus. He apprently got a large zit on his forehead and Maya and Ky joked around about it a bit while he hid it with his headband. Later, after escaping Battacor, a family of slaves as well as a little boy presumed that he was "Fuka" - a three-eyed warrior who would deliever them from the Gihox (the zit made the third eye). At first, he was treated like royalty while his team worked but was imprisoned with them after Ky found the Fist and they fought against the Gihox. He and his team escaped, battled Battacor and the Gihox and saved the slaves as well as the Kairu. After celebrated, Boomer's zit was finally gone and he was glad that it was gone and not some great leader anymore.

In Maya Goes Bad, he, along with Ky, left behind Maya in the maze and before they found her, she turned to evil. After that, they went to the Middle East where they suddenly realized that they were wrong. They later found Maya but Boomer triggered the trap in the room. He later jumped himself, grabbed the whip from the coffin and saved Ky from falling. He and Ky later battled Maya and the Radikors and won after Maya was turned back to good. Then, he and Ky both apologized to Maya and things were back to normal.

In The Kairu Diary, he and Maya agree with Master Boaddai that they shouldn't investigate Antartica. And soon runs off to find Ky. They get caught by the Radikors, but Ky saves them and they win their battle. He is last seen laughing with his friends and Master Boaddai at Mookee's dancing.

In The Cataclysm Stone, he was training with his friends when his Kairu is suddenly drained from him. They head to Mexico, where he and his friends encounter the Radikors. However, because his energy was drained, he could not find back. After meeting the locals, They are forced to surrender but escape from the quicksand the Radikors stuck them in and challenged them again. In a desparate situation, he and Maya transferred their remaining Kairu to Ky and he was able to defeat the Radikors and seal off the Cataclysm Stone for good.

In The Guardian of the Souls, he was seen with his friends practicing a Mind Weld but were having trouble. Later, they had to Romania where they encounter the Imperiaz. During the battle, he and Maya see Koz surrendering to Ky but Ky attacking him anyway, not knowing Ky was under the influence of a Mirage attack. Ky is immediately removed from Team Stax and he and Maya move on. Later, they encounter the Guardian of the Souls and are having trouble. After some help from Ky, they send the Guardian into his own vortex and challenge the Imperiaz again. However, he is placed under the same Mirage attack and attacks Maya, thinking she is the Guardian. Ky then arrived and broke the effect on Boomer and together, all three of them defeated the Imperiaz.

In The Valley of the Banyan, he and his team just lost against the Battacors and were trapped in a ice chamber. After Mookee saves them, they head back to the monastery where Master Boaddai just sensed a massive Kairu deposit and they head there. Later, he sees that the merchants are selling a lot of figs and notices the Battacors. He, along with Ky and Maya, are forced into battle after Mookee ignores the tactic of stealth. Boomer manages to get the upper hand against them but due to Mookee's mishap, he and his friends lost again. They later get trapped by the tree roots and Boomer manages to escape their hold on him as well as his friends. They battle the Battacors again and were winning but due to another Mookee mishap, he is taken out along with Maya. In the end, however, Ky and Mookee are able to win and he gets a new Roots of Doom Attack Card. After getting back, he is glad that Mookee went back to cooking but sick about eating figs.

In Neptune's Reef, he appeared again and it was revealed that he had a fear of deep water but was able to conquer his fear.

He appeared in The Chalice.

He also appeared in Tournament of Champions.

Shifter Froztok
Add a photo to this gallery

Solar Wind
Add a photo to this gallery 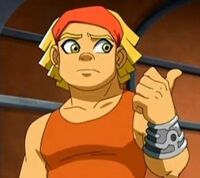 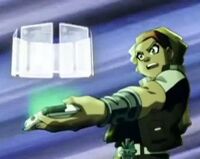 Add a photo to this gallery
Retrieved from "https://redapedia.fandom.com/wiki/Boomer?oldid=19000"
Community content is available under CC-BY-SA unless otherwise noted.