The Fist of Colossus an ancient artifact in Redakai: Conquer the Kairu.

It is a large stone fist that had a large amount of Kairu energy. According to the legend from Master Baoddai, it is an ancient artifact that gives power to whomever owns it.

The Gihox were trying to find the Fist of Colossus and were having human slaves find it for them. Team Stax and Battacor were also looking for it but Team Stax managed to defeat both Battacor and Gihox and obtained the Kairu energy within it.

It is now with the freed slaves in order to protect from the Gihox, according to Ky. 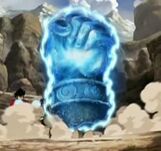 Fist being scanned by Battacor

Add a photo to this gallery
Retrieved from "https://redapedia.fandom.com/wiki/Fist_of_Colossus?oldid=7259"
Community content is available under CC-BY-SA unless otherwise noted.