Kieran McCann makes his debut in the episode The Chalice. When he first appears he sees Team Imperiaz approaching his castle and hides his Chalice; an artefact that has been in his family's generation for years. Kieran doesn't know it but his Chalice has been infused with Kairu energy. Team Imperiaz enter his caslte (looking for the relic) and then are attacked by motion activated catapults. Kieran appears through smoke from one of his catapults after the Imperiaz destroy them. Kieran tells the Imperiaz to leave but they want to take his castle. Team Stax shows up and is defeated by the Imperiaz. Kieran and Team Stax are driven out of the castle by a huge water flood that Princess Diara activates. Kieran and Team Stax talk and then Kieran finally knows about Kairu energy. He senses that Maya can feel the energy and she is shocked that Kieran knew she had that ability. Kieran mentions he has a secret entrance back to his castle and they travel 'underwater' through a holographic cloaking device that appears to look like water, but isn't. Team Stax eventually defeats the Imperiaz and Kieran gets his castle back.

Kieran McCann makes another appearance in Return to Kieran's Castle. 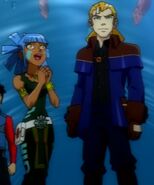 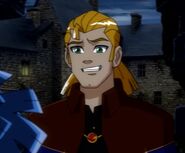 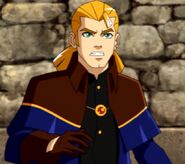 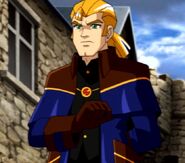 Kieran with Maya in Season 2
Add a photo to this gallery
Retrieved from "https://redapedia.fandom.com/wiki/Kieran_McCann?oldid=18204"
Community content is available under CC-BY-SA unless otherwise noted.