Merl is Boomers Father in Redakai: Conquer the kairu.

Merl first appeared in the episode Farm Boy Boomer. Team Stax travels to Boomers family farm because there is a kairu relic there. Boomer meets his parents for the first time in one year and he sent a letter to his parents telling them that he was the leader of Team Stax (when he really isn't). Team Stax finds the kairu relic but then Boomer reminds Maya and Ky that the relic is probably helping his family's farm. Team Stax ends up not draining the relic for the kairu. They decide to hide it in a well. Later, team Battacor kidnap Merl and Reeba and want to know where the kairu relic is in order for their safety. Zylus pushes Boomer's parents in a silo and grain starts falling on them. A kairu challenge is made and the two teams fight. Eventually, Team Stax wins the battle and Boomer gets his parents back. 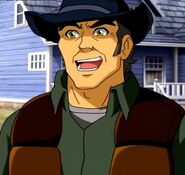 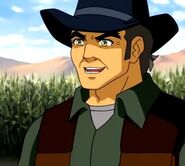 Add a photo to this gallery
Retrieved from "https://redapedia.fandom.com/wiki/Merl?oldid=17912"
Community content is available under CC-BY-SA unless otherwise noted.