The Redakai Trading Card Game is a current entertainment and gaming property created by Spin Master, famous for creating Bakugan. An animated television series of the same name has been released simultaneously as the game is in hobby stores.

In the Redakai Trading Card Game, cards are referred to as "X-Drives". Every character and monster features Spin Master’s proprietary Blast 3D technology – 3D images that move as the X-Drive is moved by the player. Attack X-Drives also feature images that animate to illustrate the attack.

Redakai’s X-Drives enable a “Stack to Battle” format for the game. Attacks and monsters are stacked directly on characters, where the cards themselves track damage. It features both a basic game for younger fans, and a tournament caliber advanced game with reacts, deckbuilding strategy and strategic decision points.

Note: Credit for rules goes to the official Redakai website.

Includes a full deck and battle field accessories. Comes with 43 X-Drives, one Gold Pack Rare, three Character Bays, one Card Screen with a Kairu Counter, and one Draw Deck.

There will also be action figures, online communities and content, publishing and more to go along with the Trading Card Game.

ABILITIES - Character and Monster Abilities are special powers that affect the game as long as the Ability text is visible. An "Activated Ability" is an ability that you must pay an additional cost to play.

ATTACK CARDS - These cards are played on your opponent's Characters to deal damage to them. You may play attacks on your turn by paying their KAIRU COST.

ATTACK POWER - Each attack has a power that consists of a NUMBER and a COLOR. The power number must be higher than an opponent's defense in that attack's color in order for the attack to hit that Character.

CHARACTER'S ABILITY BOX - These cards can be played when your opponent attacks you and will have effects that can change what happens.

DEFEATED - When a Character is damaged in each of its three DAMAGE ZONES, it's defeated. Defeated Characters aren't considered to be in play any more and have no abilities. Cards can't be played on Characters that are defeated.

DEFENSE NUMBER - These numbers are found on the side of CHARACTER and MONSTER CARDS. There will always be a COLOR of defense. Any attacks of that color played against a Character must have a higher power number than the defense number in order to HIT. Any attacks that don't have enough power are blocked and put into the attacker's DISCARD PILE.

EXHAUST - When KAIRU is used it's exhausted until your next turn. Exhausted KAIRU can't be used to pay for costs.

KAIRU - Each player gains KAIRU each turn. KAIRU is exhausted to pay the KAIRU COST of your cards.

MAXIMUM KAIRU - Your maximum KAIRU is the total number of KAIRU energy you can spend to play cards and abilities. You increase your MAXIMUM KAIRU by 1 each turn. Some cards will let you increase or decrease that number as well.

MONSTER CARDS - These cards are played on your CHARACTER CARDS to make them more powerful.

REACT - Some cards have the word REACT in their ability box. These cards can be played when your opponent attacks you and will have effects that can change what happens.

RECHARGE - At the start of each of your turns you'll RECHARGE all your KAIRU. Some other cards will allow you to RECHARGE KAIRU as well.

STOPPED - If your attack is STOPPED, it doesn't hit and is put into your discard pile instead of on an opponent's character. An attack is STOPPED if the defense of the character is higher than the power of the attack or if a card tells you to STOP an attack.

TURN - A turn consists of a player gaining a KAIRU, recharging their exhausted KAIRU, drawing a card and playing Monsters and Attacks. Your KAIRU recharges only on YOUR turn. On your opponent's turn you can only play REACTS and only if you have enough KAIRU to do so. A player's turn ends when he can't or does not wish to play any more cards. That player declares his turn is over and it then becomes his opponent's turn. 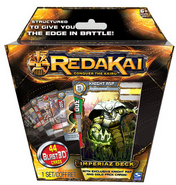 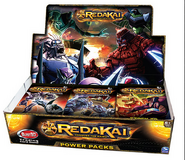 Add a photo to this gallery
Retrieved from "https://redapedia.fandom.com/wiki/Redakai_Trading_Card_Game?oldid=9489"
Community content is available under CC-BY-SA unless otherwise noted.