Slanva appears in the episode The Gauntlet of Lokar. She and two unnamed Bayouviens capture Team Stax because they believe they are damaging their swamp. When they trap Team Stax in a net, Maya mentions reading about the Bayouviens in her Culture Tablet. Slanva is impressed with what Maya knows about them and sets Team Stax free because it is not often that "Drylanders" know about their culture. Later in the episode Team Stax informs them that Team Radikor were the ones who were damaging their swamp. Slanva says the action is to 'wide spread' and she wants her people to leave. Maya tells Slanva to just wait a little so they can stop the threat. Slanva agrees and mentions the idea to split up so they can find Team Radikor faster. Slanva and the two unnamed Bayouviens run into Team Radikor first and Zane attacks them. Team Stax arrives and Maya tells Slanva that they can take the fight from there. After Team Stax beats Team Radikor, Maya uses a Tsunami (or rather Supernami) attack and heals the swamp. Slanva refers to Team Stax as her friends in the end of the episode. 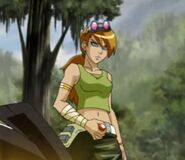 Add a photo to this gallery
Retrieved from "https://redapedia.fandom.com/wiki/Slanva?oldid=18239"
Community content is available under CC-BY-SA unless otherwise noted.